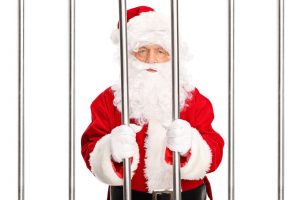 The Christmas season is a time of spreading cheer and good will to your fellow man. So no bad could possibly happen during this peaceful, happy time… Right? Wrong. Crime continues despite the season. Some crimes are even more strange than normal! We’ve compiled a short list of the strangest Christmas crimes involving Santa Claus himself.

A Very Two By Four Christmas

Everyone loves going to your local mall to see jolly Santa with the kids. However, one Santa was not so merry as he beat a lady with a two by four. She reportedly stole a significant sum of Hersey’s kisses from Santa. In retaliation, Santa knocked the woman unconscious with the weighty board. He was arrested and received the charge of aggravated assault.

Santa Had Too Much Christmas “Spirits”

One family was shocked and scared to find a drunken Santa stumbling through their yard. He continuously shouted about his missing reindeer, insisting people call him if they find it. The children at the scene reported that this Santa was an impostor because Santa does not drink alcohol.

Taking Breaking and Entering To A New Level

This gentleman was not dressed as Santa when he decided to attempt his crime. Instead, he tried to channel Old Saint Nick. One man attempted to break into a home by diving into a chimney. However, he got stuck. Once rescued by the firefighters, he was sentenced to nearly a year and a half in jail. This situation earned him the nickname “Santa Claus Burglar.”

Remember to stay safe during this holiday season. If you need bail services, call Double O Bonding at (800) 660-6467 today!